if you want to try NoSQLBooster 7.0 out now, you can get it from the following link.

The following figure shows the main interface of version 7.0 with a light theme. 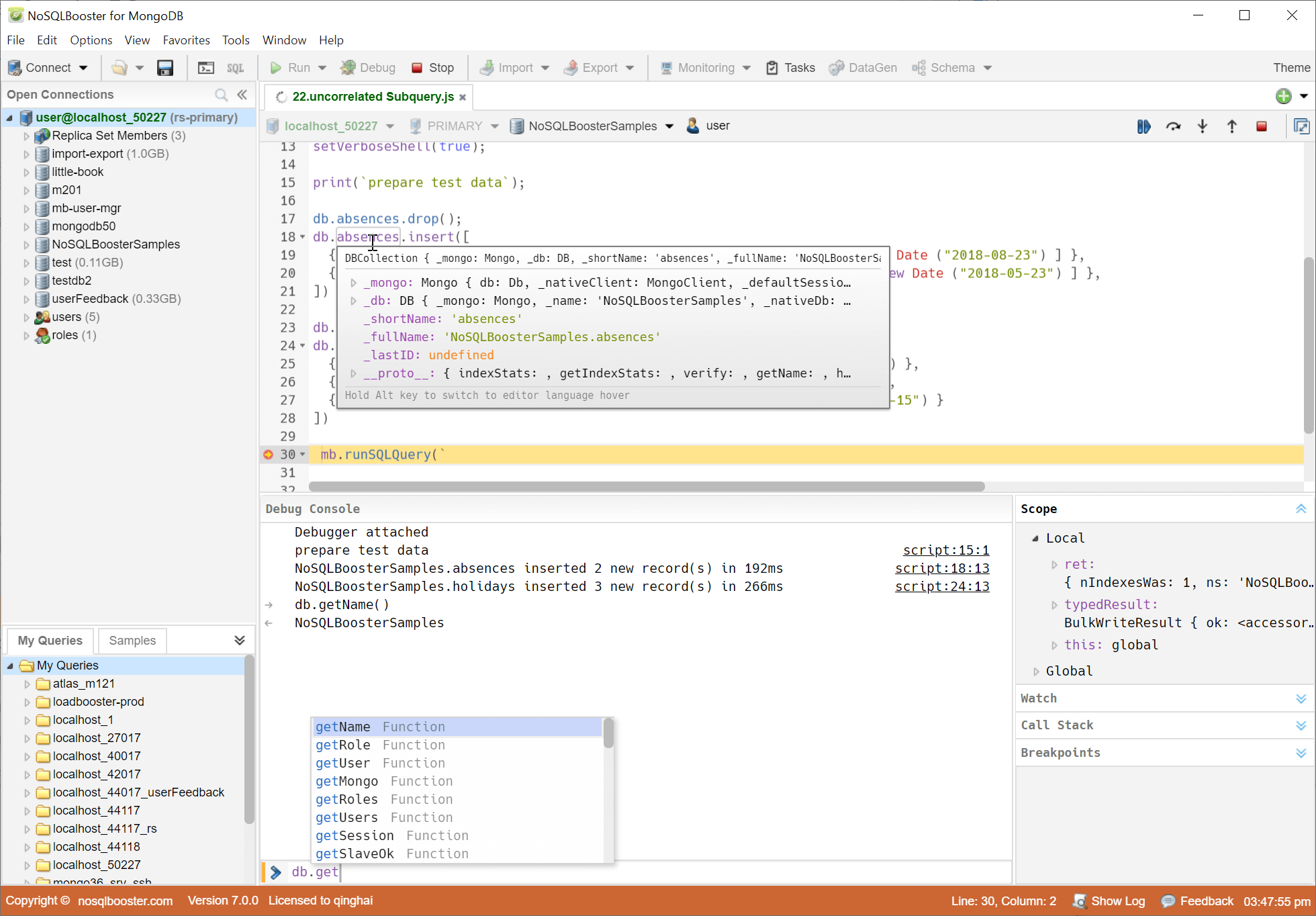 The following figure shows the main interface of version 7.0 with a dark theme. 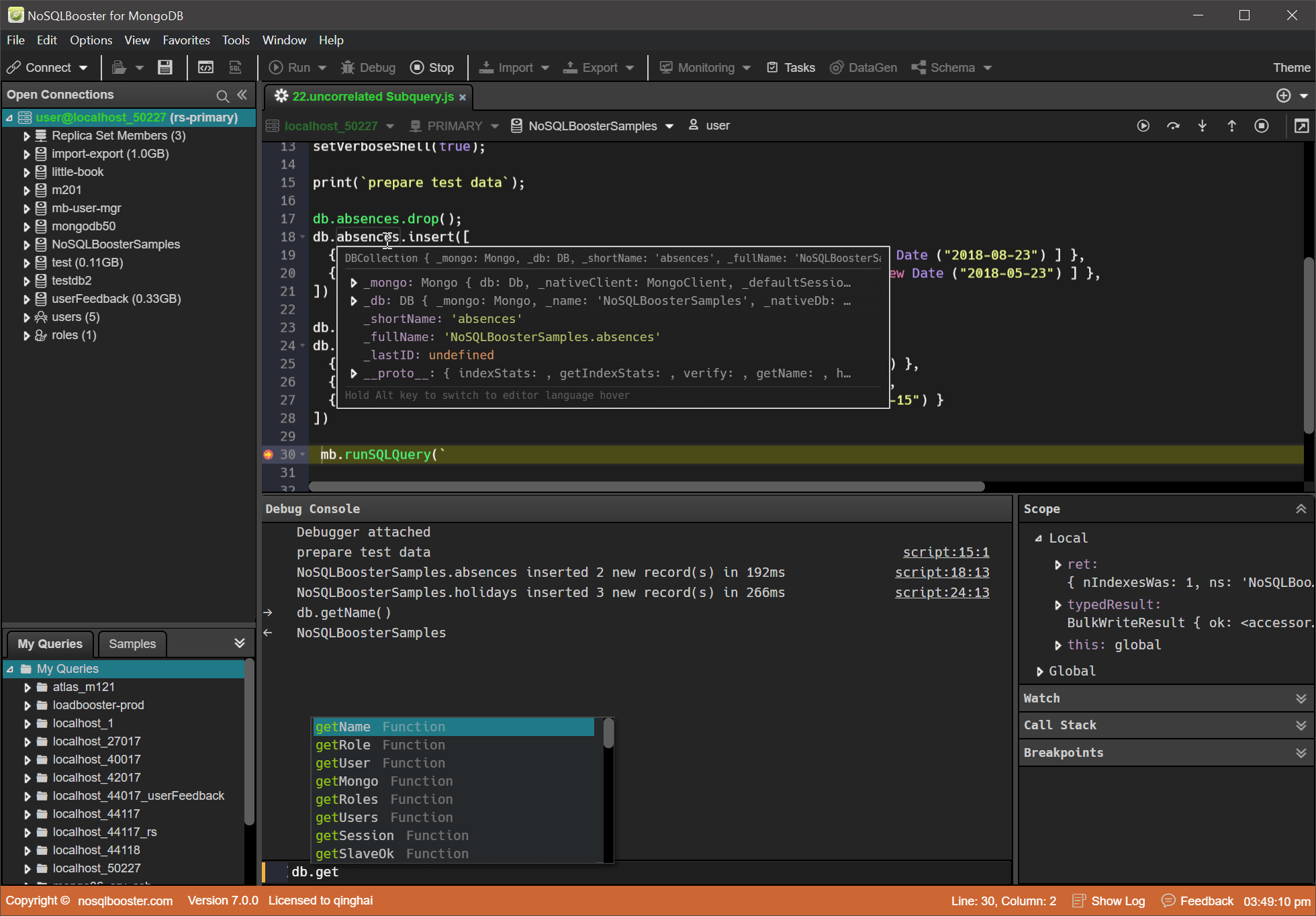 Let’s dive in and get an overview of what’s coming in NoSQLBooster 7.0!

Although we are showing screenshots of NoSQLBooster for Windows, all these new features are available for Mac OS X and Linux as well.

Still debugging your MongoDB script with print statements? Now, you can use NoSQLBooster's built-in debugging capabilities to set breakpoints and step through code.

To start debugging, click the editor's text margin to set a breakpoint F9, and run with debugger F5. When your breakpoint is hit, you can explore the call stack, watch and edit variables, and interact directly with the debugger. 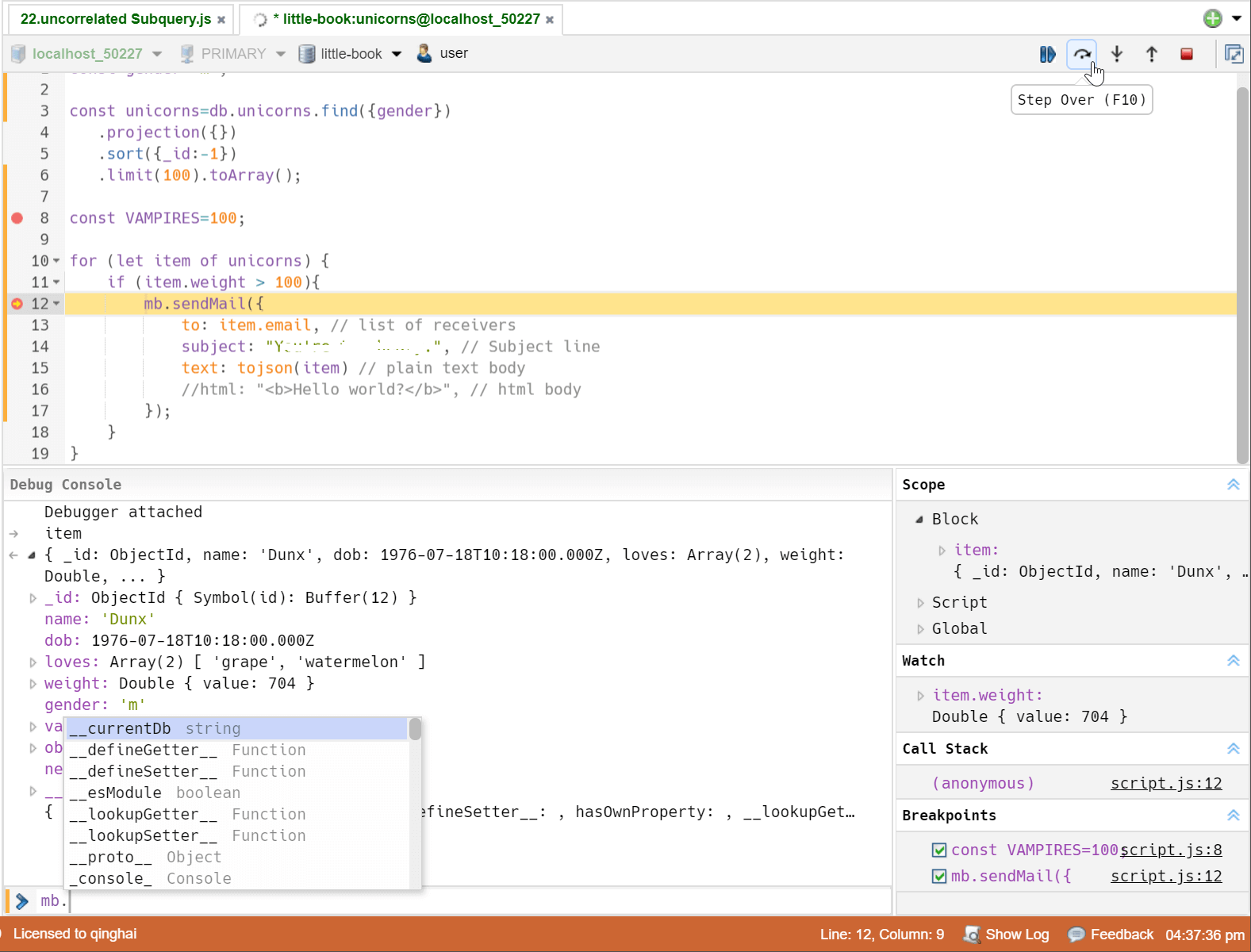 Due to the introduction of the debugger, some keyboard shortcuts have been adjusted, and you can view the bound shortcuts through the button's tooltip.

In many panels, we have added a replica set members selector that allows you to switch between the members of the replica set in the interface. This is especially convenient for monitoring tools, and many times you want to drill down to a rs member to see the details. 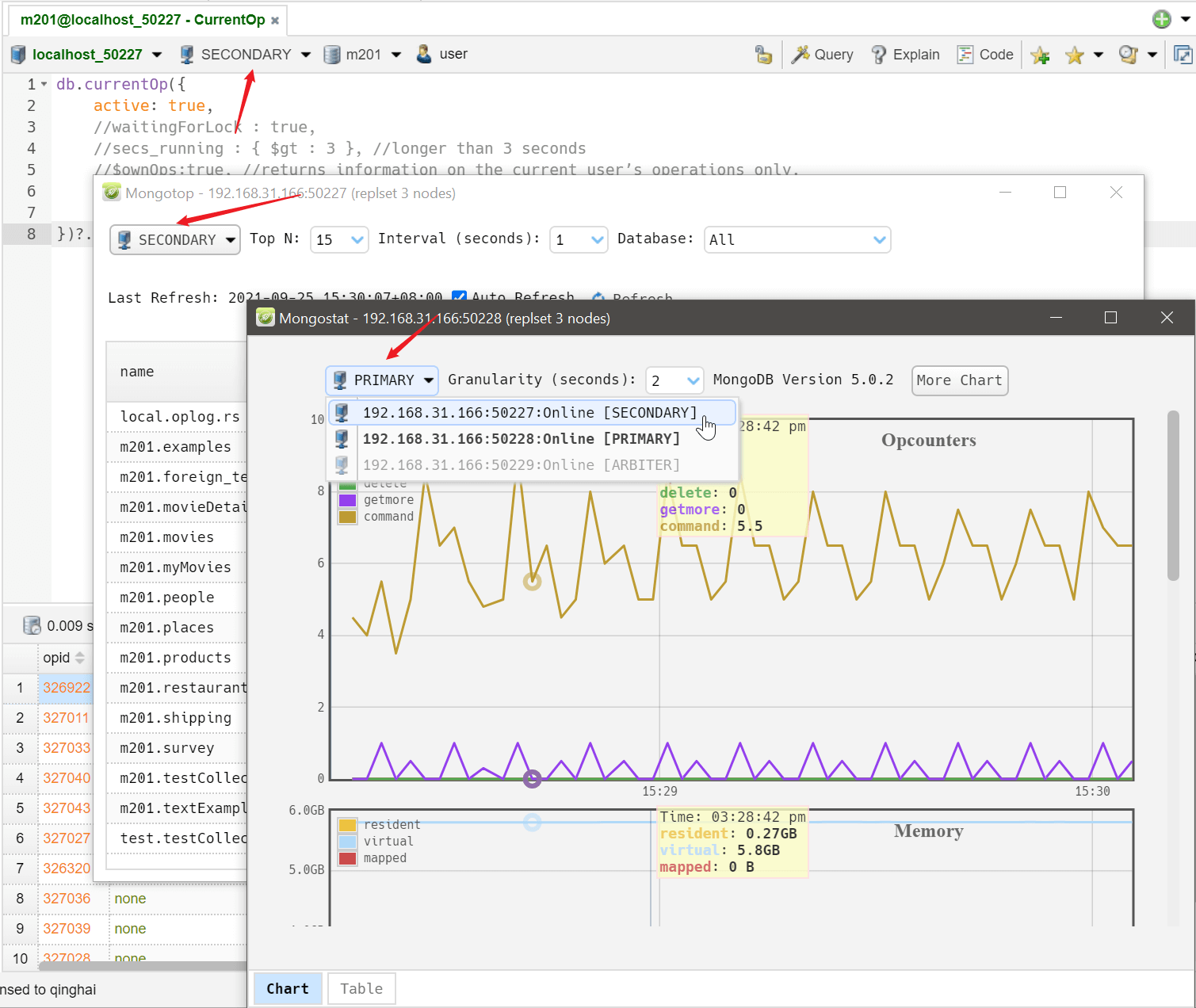 The new re-schema tool provides a GUI for updating the MongoDB collection schema. Like other tools provided by NoSQLBooster, it is essentially a code generation tool that helps you generate code to update the collection with a few clicks, and then you can use the generated code as a basis for more complex programming, then save it as a script file, or even add automated tasks.

This feature uses "$convert" operator and update using an aggregation pipeline, requires MongoDB server version 4.2 or above. We also provide a code template called convertFieldType to convert individual fields, which can be used directly in the script editor. 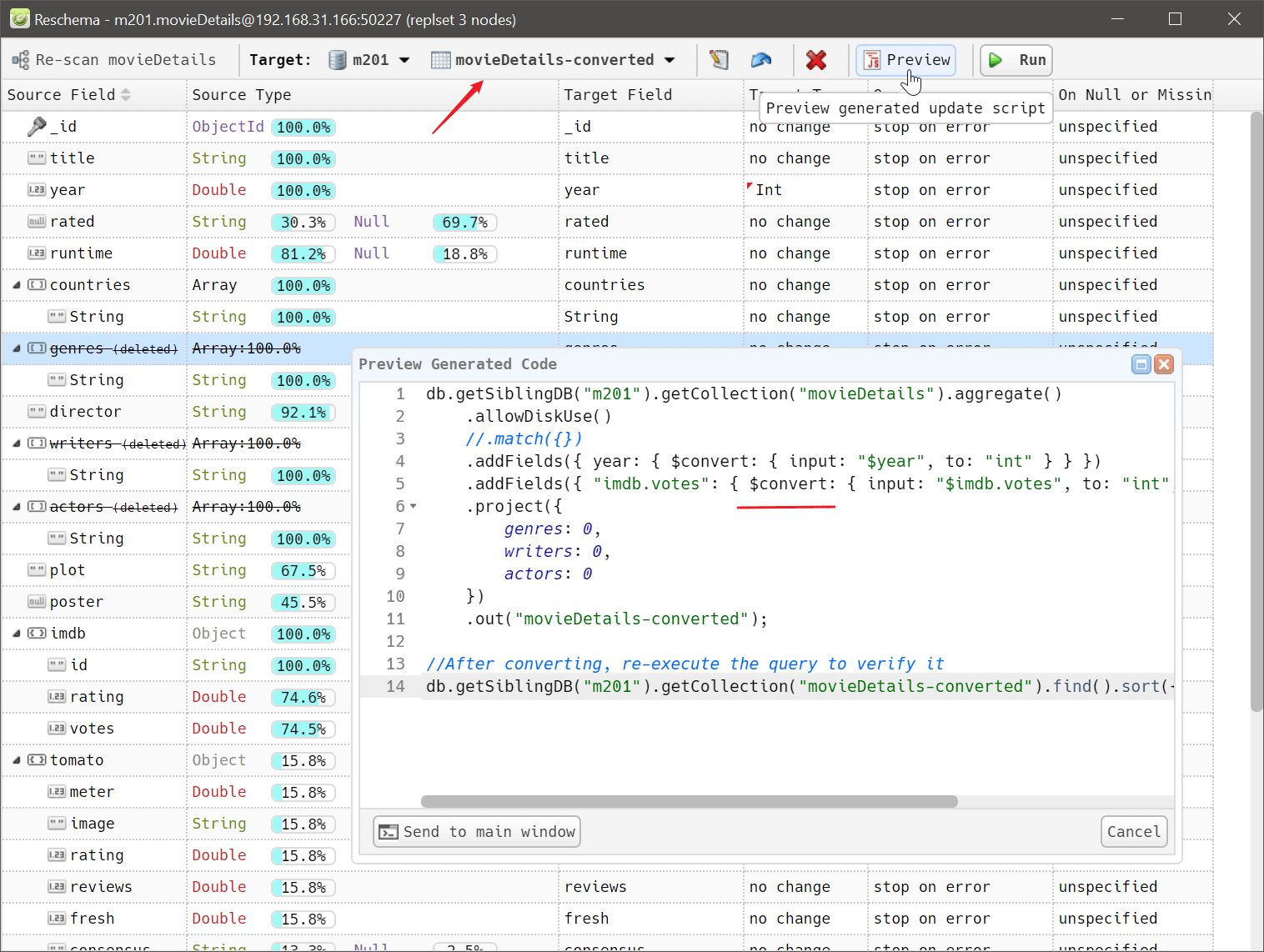 NoSQLBooster 7.0 upgrades the MongoDB Node.js driver to the latest 4.1 and embedded MongoDB Shell to 5.0, adding support for all the new mongo shell methods and aggregation operators of MongoDB 5.0. For more information on MongoDB 5.0 , see Release Notes for MongoDB 5.0.

This release added a few code templates for MongoDB 5.0.

In version 7, automated tasks added the ability to notify via e-mail. You can specify that some users receive e-mail notifications of task completion or failure. All types of tasks can be notified by email.

Version 7 can intelligently match typed text to enable completion beyond single words. Take the toUpperCase method of a string as an example. In the old version, you had to type "toU" or "Upper" to find the method. In version 7, just type "tu" to locate the "toUpperCase" method.

As shown in the following figure.

Now, we have 14 built-in editor themes to choose from, and you can apply the editor's theme through the editor's right-click menu. It may also be set through the main menu.
Main Menu -> Options -> Editor Settings -> Themes 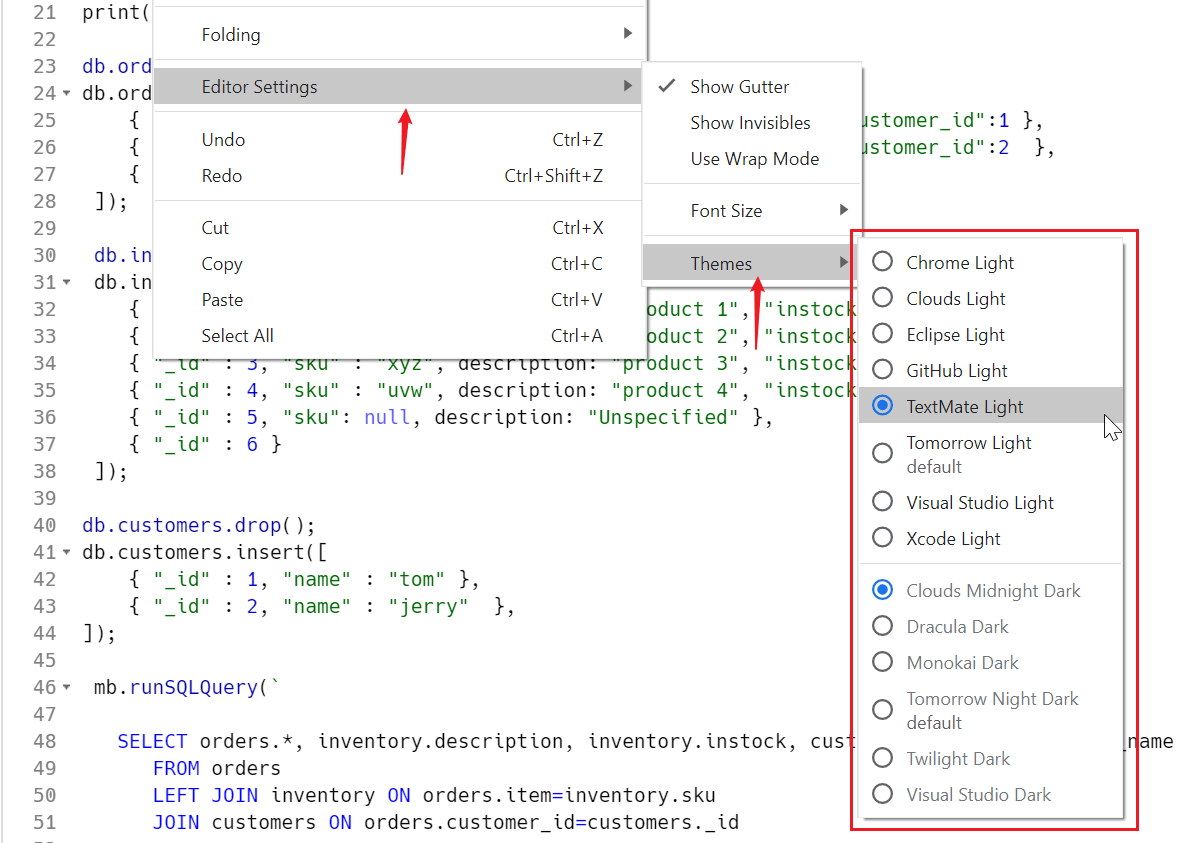 The font size of the editor also be set through the main menu. Main Menu -> Options -> Editor Settings -> Font size with a minimum of 6px and a maximum of 30px. 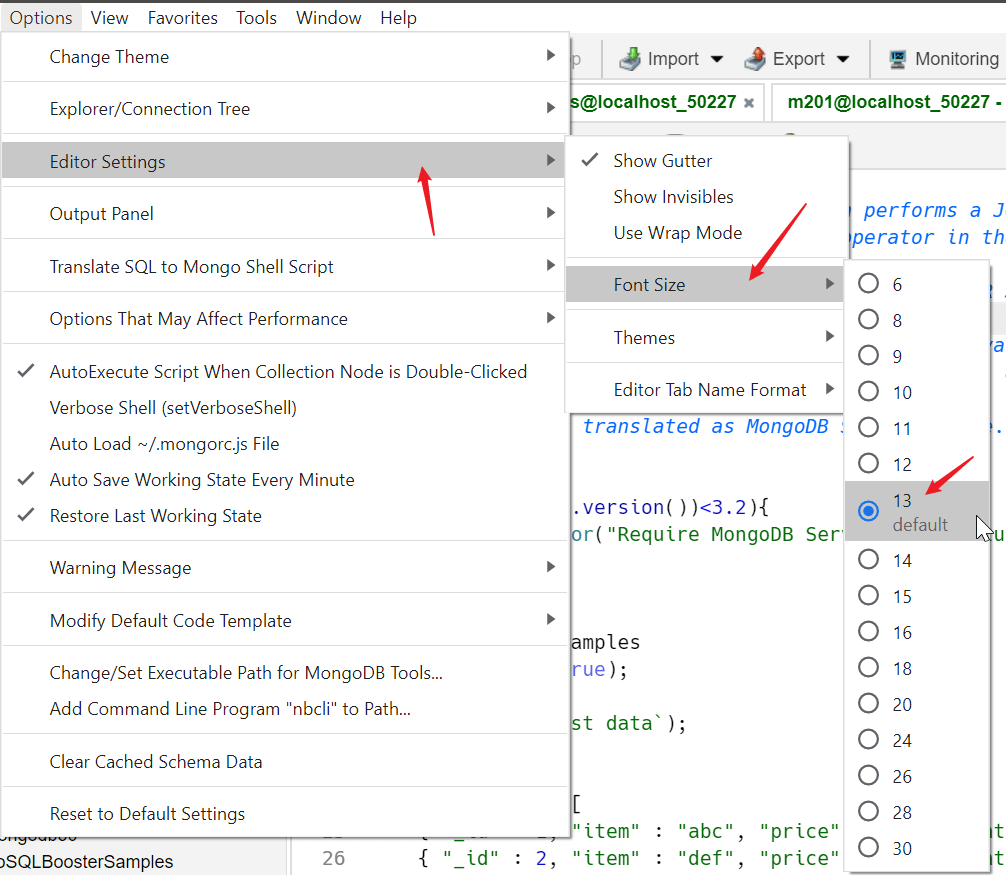 Switch rs member within the editor

You can send the editor contents to the external editor associated with the system through the editor's right-click menu. 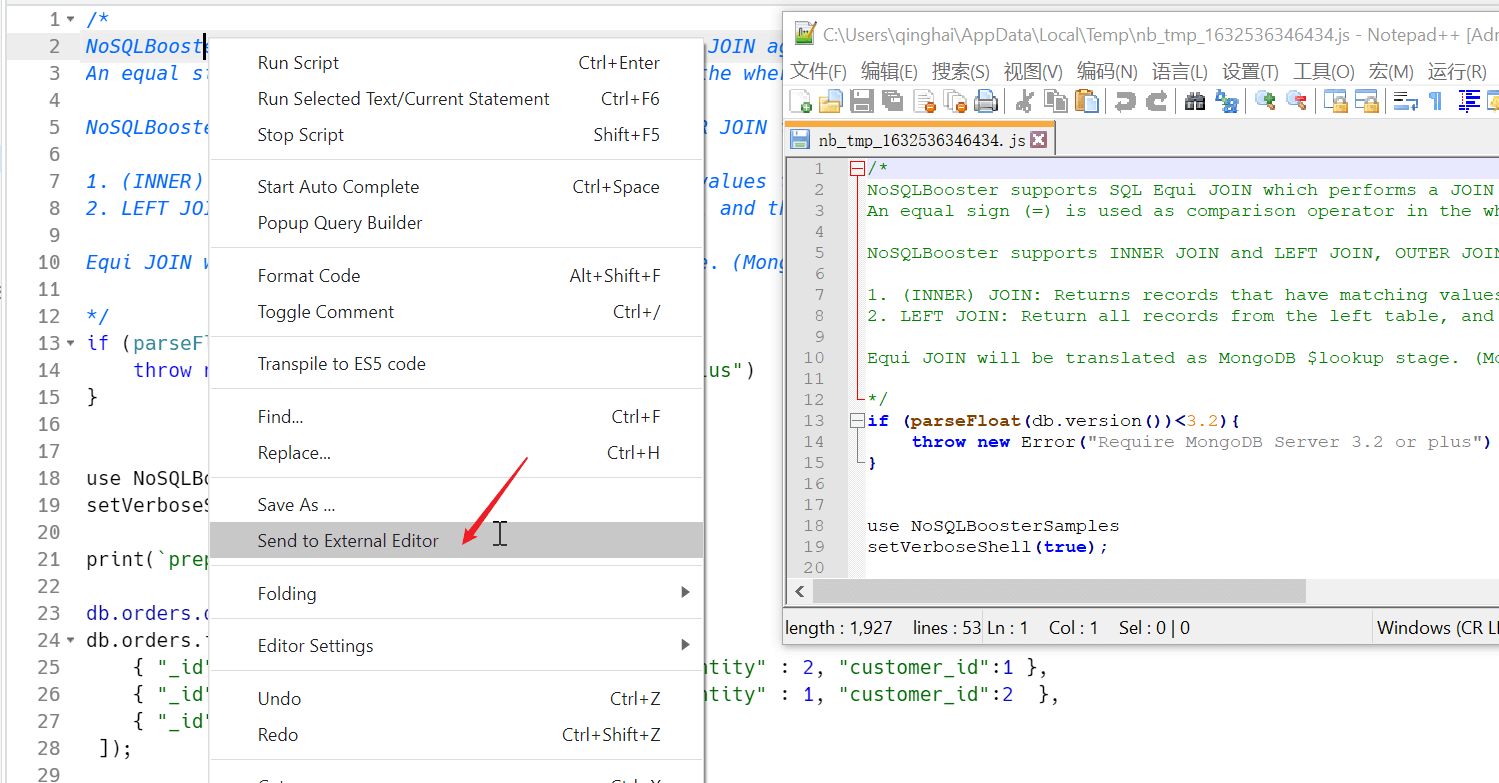 For date fields, grouping by a certain point in time is not practical. In version 7, we have enhanced grouping of date and time fields. The one-click grouping function will be grouped by day (formatted by $dateToString operator), and users also modify the generated code to support more date ranges. 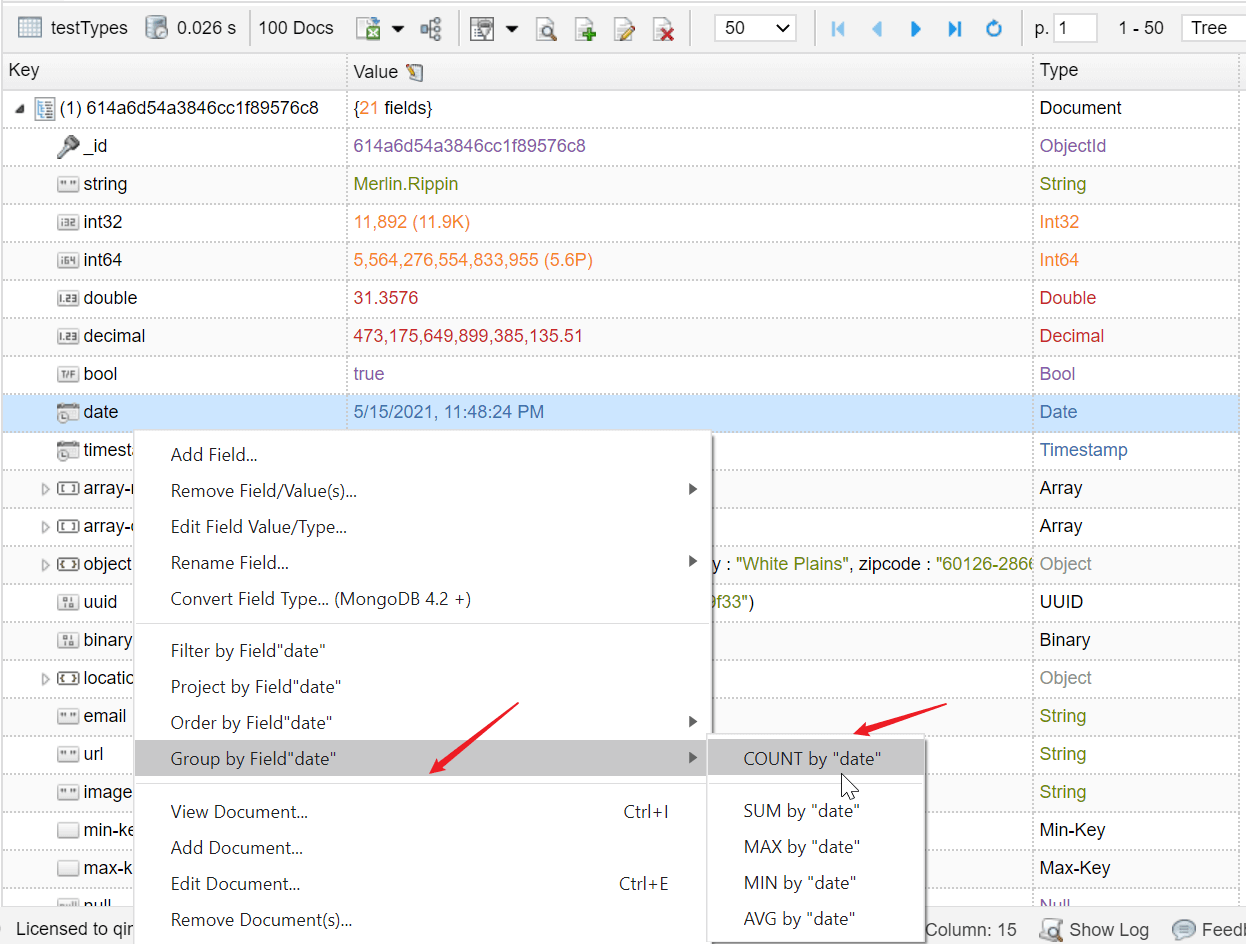 The $dateToString operator converts a date object to a string according to a user-specified format. The date must be a valid expression that resolves to a Date, a Timestamp, or an ObjectID. Please refer to this page for format descriptors. 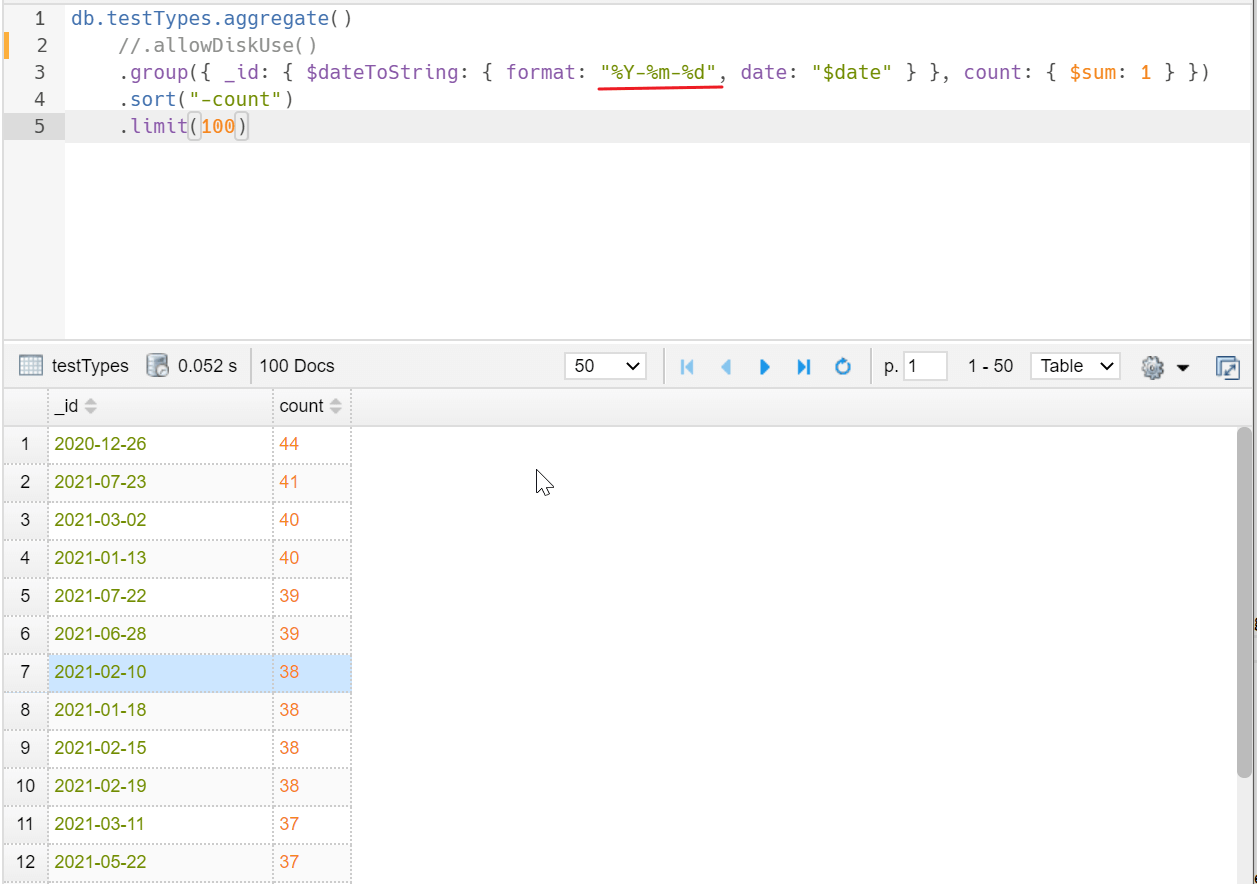 When you use one-click grouping for an embedded array field, the generated code automatically prepends a $unwind stage. 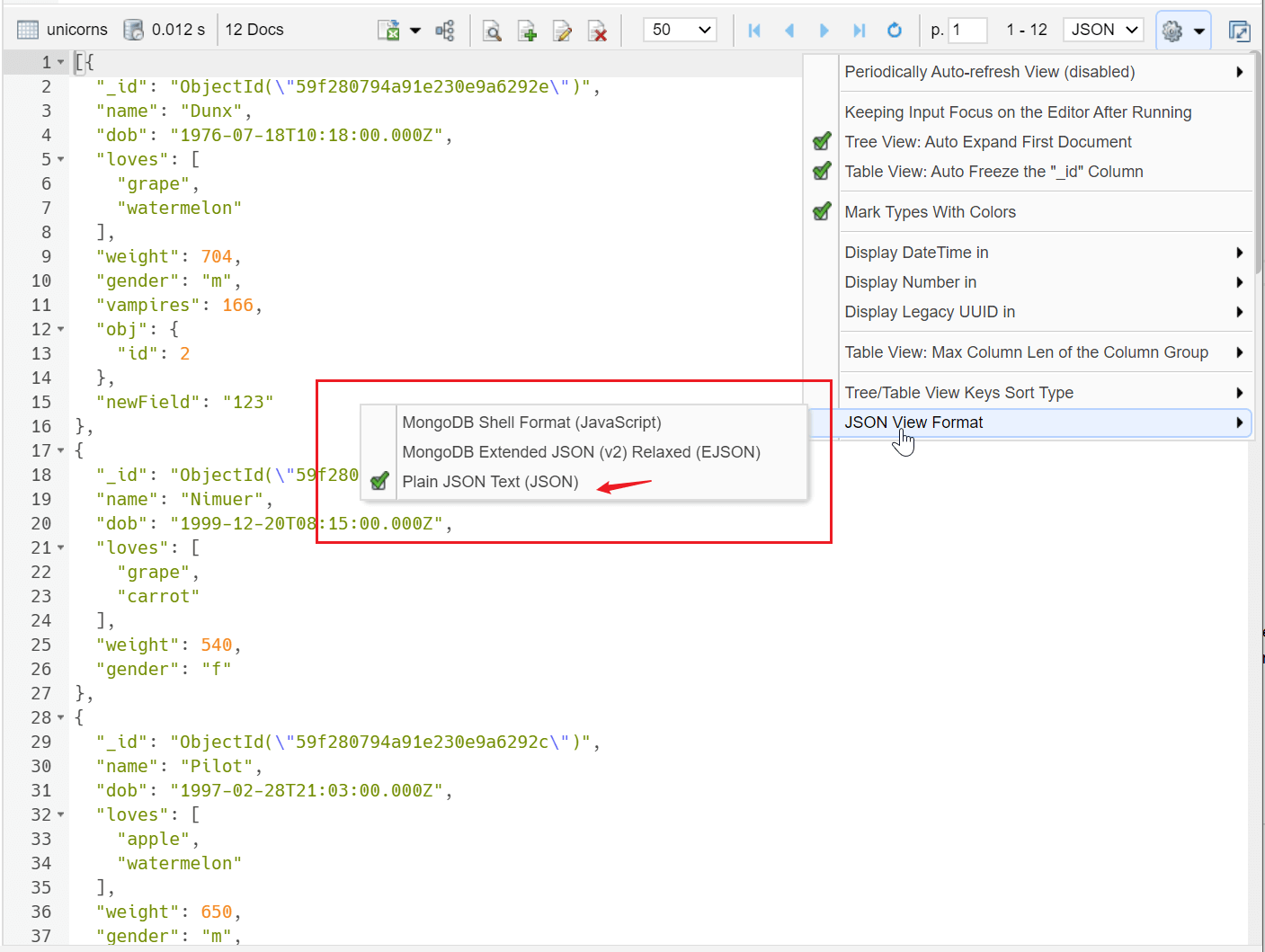 Add a new navigator bar to document viewer, previous, next ... And, when automatic refresh is activated, the pop-up edit box and document viewer are refreshed synchronously. 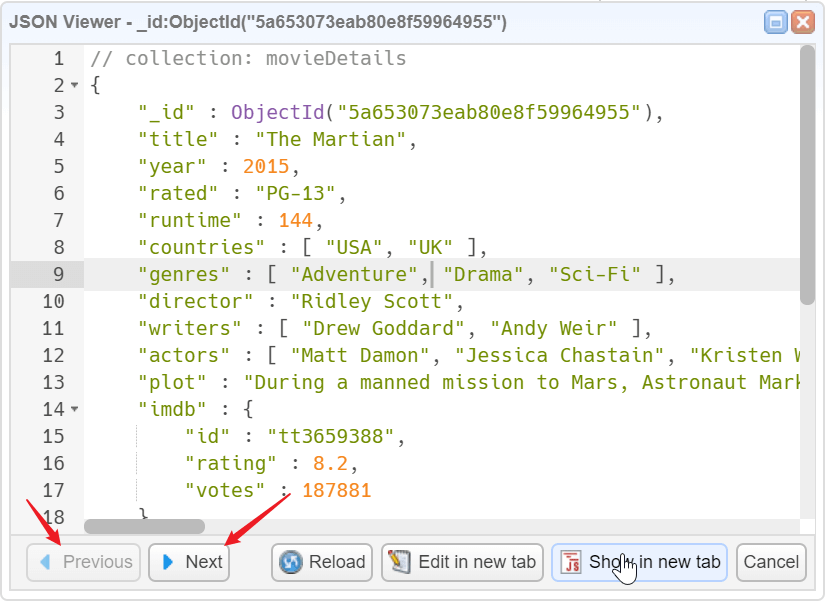 The following picture shows the tab switcher, and the orange item indicates that the tab is being debugged.

The following figure shows the right-click menu of the tab. Click "Rename Tab..." to rename the title of the selected tab. 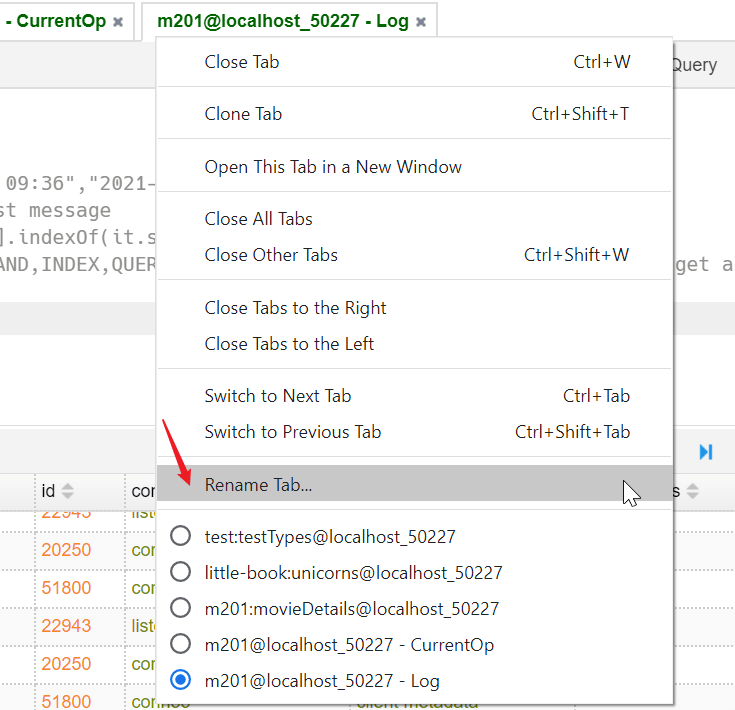 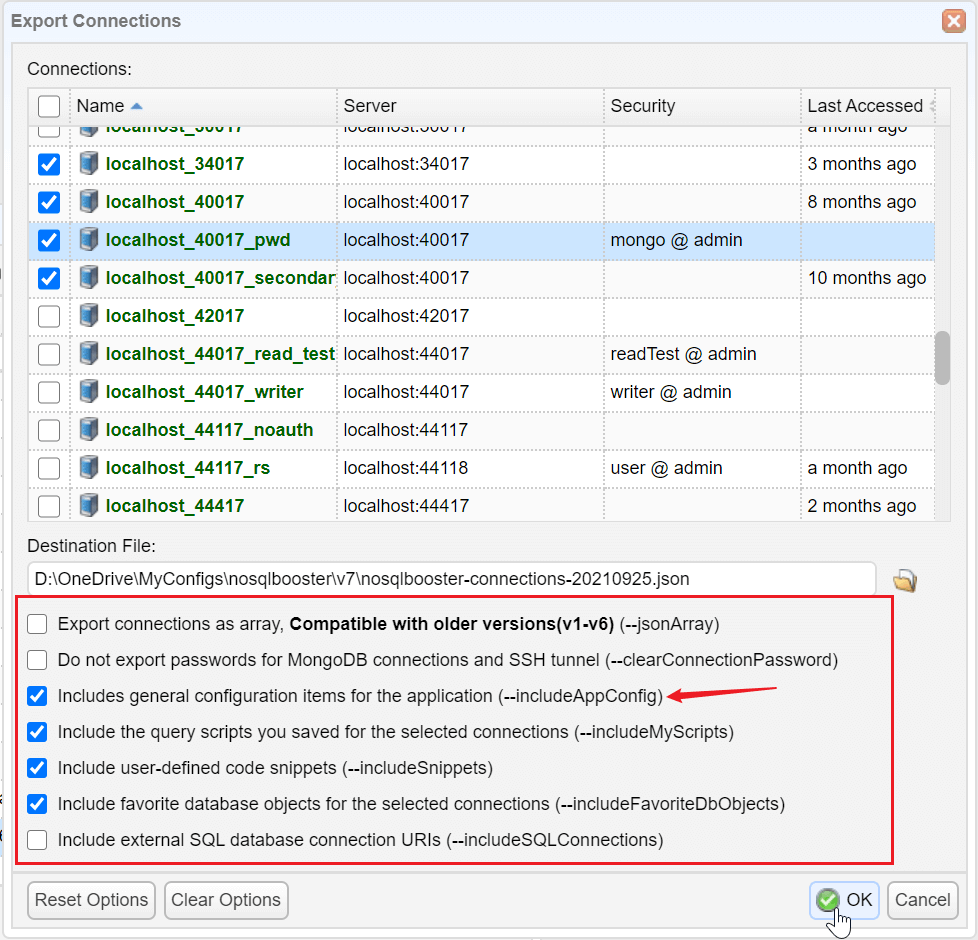 The following figure shows all the supported export formats, and the red box shows the new. 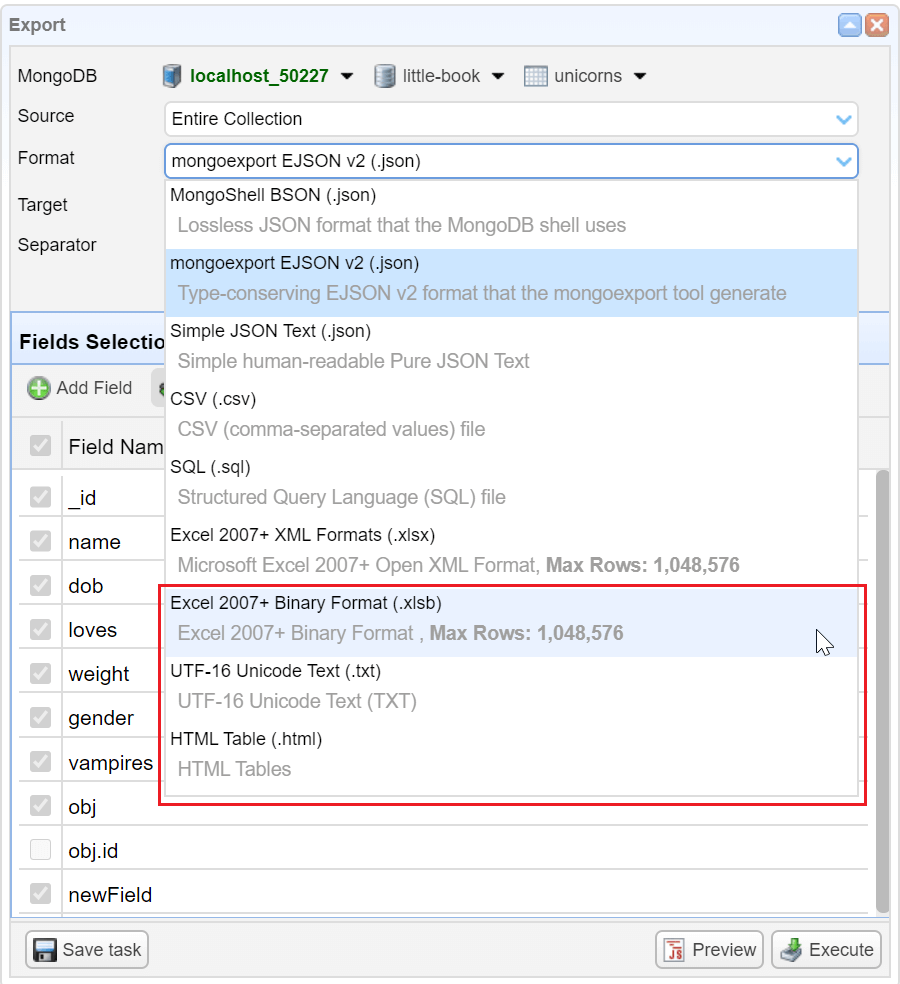 The faker.js module is updated to the latest 5.x version, and a large number of API methods are added to generate different types of fake data. We updated the GUI of test data generator and added the ability of name filtering and lookup. We also added several code templates that start with generateTestData to make it easier to generate fake data. 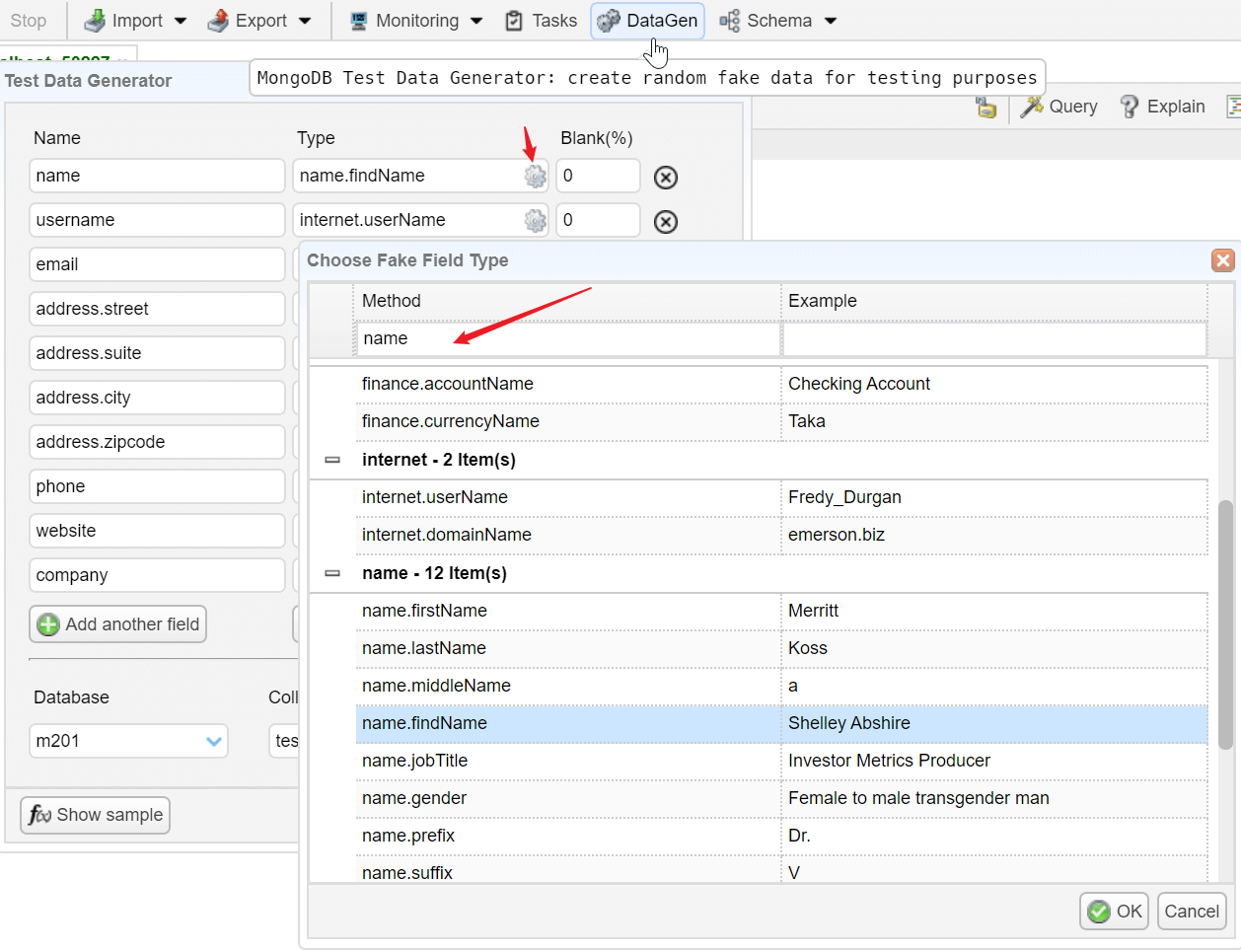 In this version, we have added several date display formats, please refer to the following figure. Marked in red as new.

Set comments for any database objects

Now, you can set comments for any database objects. Note: Comments will not be saved to the MongoDB server in any way, only on your local computer. 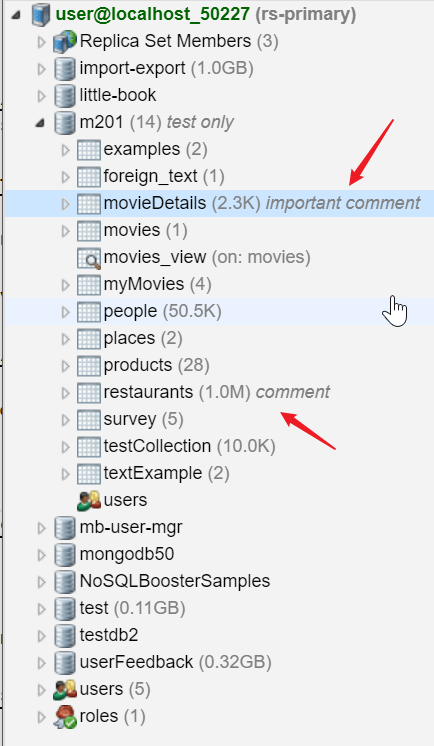 In version 7, a new query code generator Java Use Builder has been added. The Java MongoDB driver dependency is also updated to modern API. 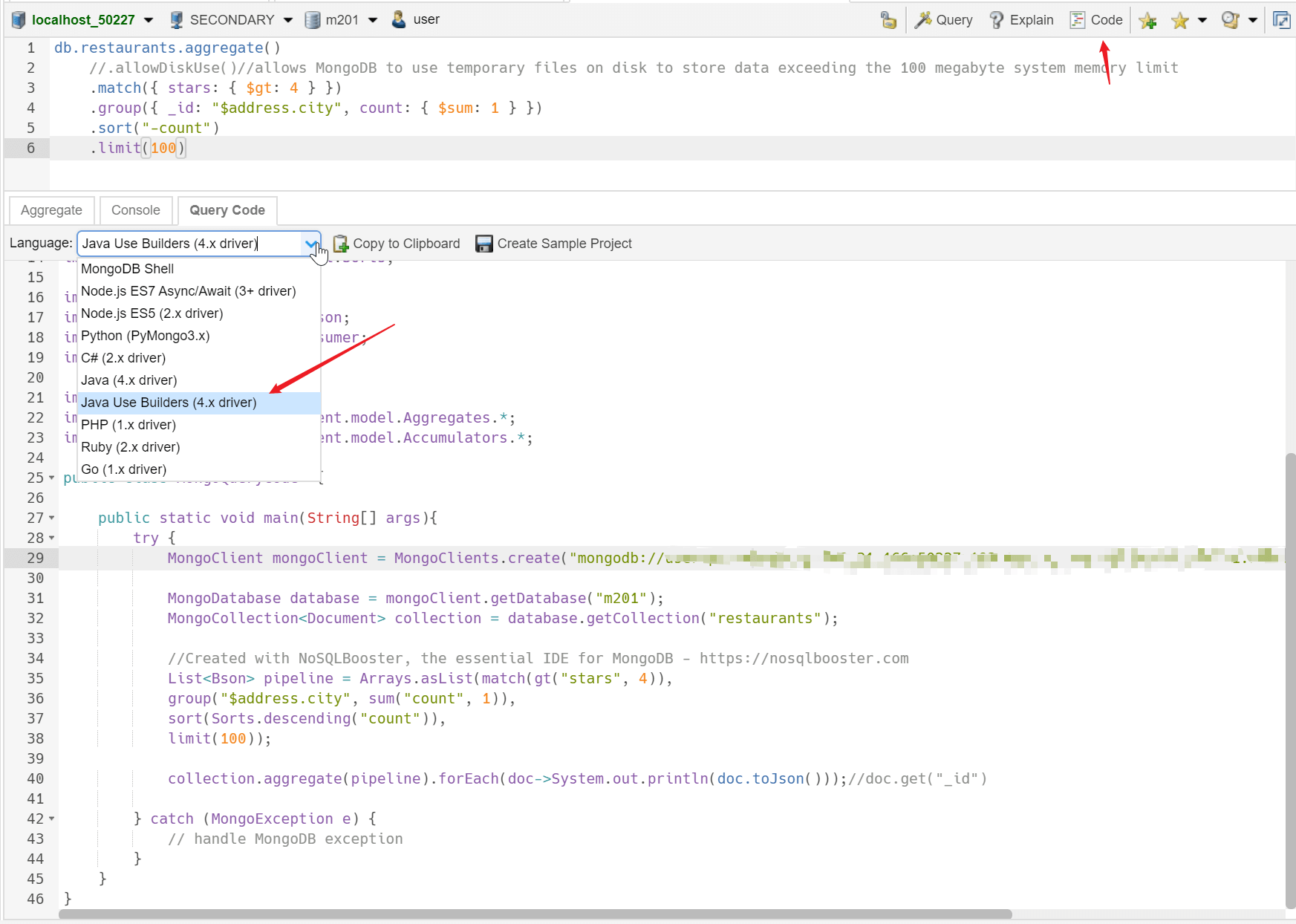 In addition to mongo (legacy mongo shell), this Open MongoShell here feature also supports mongosh (new mongo shell). When both mongosh and mongo can be found in the search path, mongosh will be preferred. 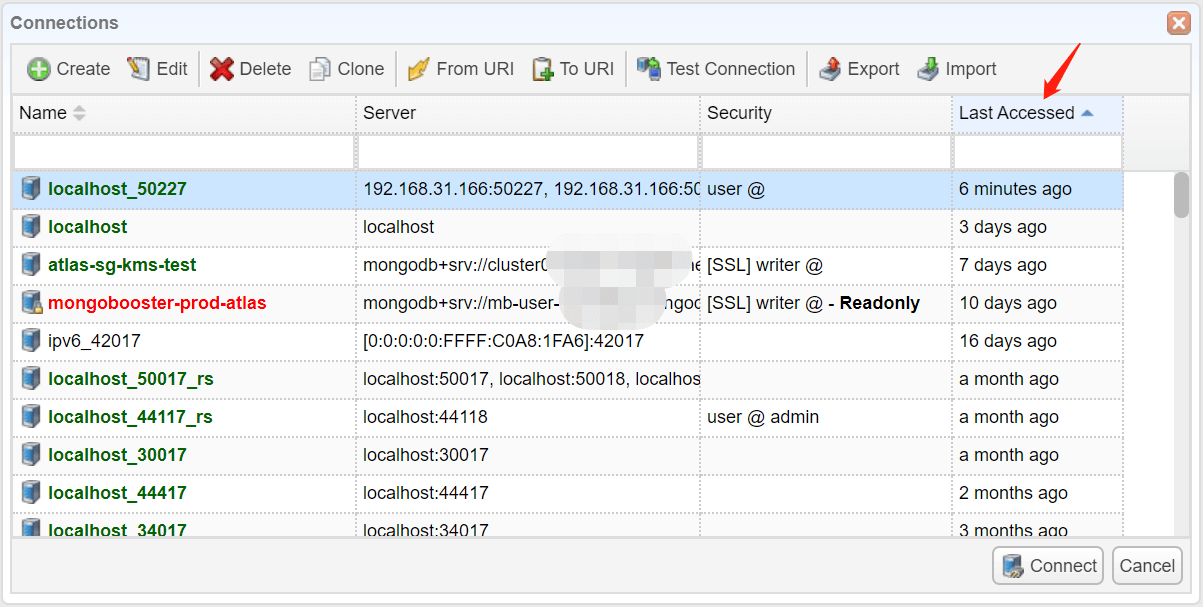 In order to be compatible with the behavior of the new mongosh, unlike previous versions (legacy mongo shell), version 7 does not need to explicitly declare the int32 type when submitting data, but automatically selects the closest equivalent type.

Compare the differences between version 6 and version 7 below

Due to the introduction of the debugger, some keyboard shortcuts have been adjusted, and you can view the bound shortcuts through the button's tooltip.

Please visit our feedback page or click the “Feedback” button in the app. Feel free to suggest improvements to our product or service. Users can discuss your suggestion and vote for and against it. We’ll look at it too.